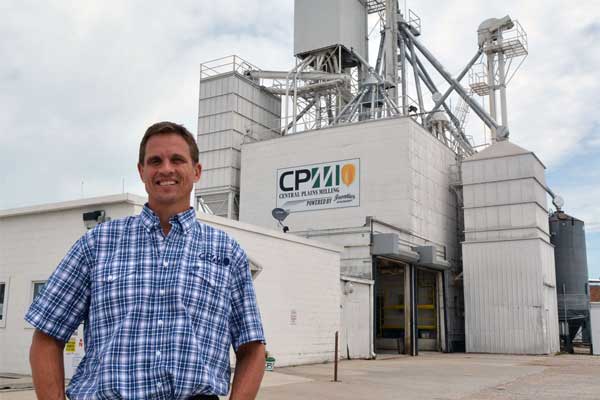 COLUMBUS — In the year since Russ Vering bought the former Husker Coop in Columbus, about $850,000 has been invested to update the facility.

He estimates the mill dates back to the 1950s.

Vering’s path to acquiring the Columbus facility is characteristic of this age of coop and feed mill mergers.

In 2014, Frontier purchased Husker Coop and the Columbus facility later became Central Plains Milling, which Frontier has 50 percent ownership of.

The investment in the Columbus facility included maintenance, but also the installation of updated systems for measuring, mixing and bagging.

“It increases our accuracy and then it also gives us accountability so we can prove how we manufacture feed,” said Vering. “It just makes us faster and it’s easier to do than how we did it before.”

But that automation also resulted in a reduction of the workforce. Between the main office in Howells and Columbus location, Central Plains Milling employs 23 people.

On a recent Friday, intern Carli Clark of Dwight, who attends Northeast Community College in Norfolk, was stacking bags of feed for cow-calf operations. Vering said his company is committed to the next generation of producers and agribusiness employees through its internship program and support of county fairs.

“We want to take care of our community as well as our employees,” he said. “Our team makes Central Plains Milling what they are today. It’s important to us that those people are well taken care of.”

Central Plains’ focus was on large cattle and hog operations, but expanding to Columbus allowed the business to explore other markets.

“It’s a great stepping stone for Central Plains Milling to build our brand,” Vering said. “Being a regional feed manufacturer, it gives us the opportunity to build all our rations and formulas. Here we do everything from scratch, so we control the process from beginning to end in Columbus.”

Central Plains has expanded into the retail sector, cow-calf operations and a growing “backyard farmer” market as Vering calls it — families who raise livestock on a smaller scale for their own consumption or for 4-H or FFA.

“They might have a couple of rabbits or even some towns are setting up their zoning laws so that you can have up to 10 chickens,” he said. “Last year we sold close to 200 tons of layer feed, so people are raising their own eggs. Just one bag at a time, we sold 200 tons of layer feed out of this location.”

One of the areas where the business is looking to expand is cow-calf operations, especially producers who don’t have in-house nutritionists.

“Those producers that could use that service, we’re seeking them out to help them balance the diets on their farm,” Vering said. “That would be the main market we’re after.”

As the Costco chicken processing plant in Fremont progresses, Vering is planning to upgrade the Howells facility to provide feed for broilers.

“There’s going to be a lot of growth in livestock production in Nebraska,” he said. “We pretty much have studied that and know that that’s coming, and we have laid some plans down to expand our operations to be able to service that type of market.”

Central Plains serves producers from the Missouri River west to Genoa and from Norfolk to Interstate 80. The focus now is on gaining more customers within a 40-mile radius of its facilities.

“One way that we can do that is by doing the right thing — always manufacturing the right feed, always having high quality standards and really doing a good job delivering our feed on time,” Vering said. “Accountability is going to grow our company.”

So far it’s been working.

Central Plains’ sales team hit its goal for the fiscal year and, in addition to expanding the Howells location, Vering is thinking about eventually building a new facility at the Columbus site.